“Starting something new or making changes requires effort, persistence and motivation. Being afraid of failure will only hold you back. Focus on your goal”

My books “Beyond Impossible” & “Limitless are available to buy on Amazon or directly through me.

Mimi is one of the world’s most inspirational female distance runners, having made an incredible journey from stay-at-home mother of three to multiple Guinness World Record Holder. With hard work and determination Mimi has shown that it’s never too late to fulfil your dreams and achieve the impossible.

Pushing herself to the limits has strengthened Mimi’s resilience and taught her its importance in boosting her mental and physical health, especially having suffered with the eating disorder anorexia for 15 years. Hearing Mimi speak about her amazing experiences with honesty, humility and humour, will leave you inspired to seek out personal challenges of your own and be much more aware of how to develop your own resilience and well-being.

Mimi Anderson is an endurance athlete who found her love of running at the age of 36 very quickly discovering her ability to run silly distances by taking the Marathon des Sables in 2001 a race billed as “the toughest footrace on earth” with just over a year’s running under her belt.

Mimi has taken part in extreme races around the world running across Deserts, mountains, enduring the freezing temperatures of the Arctic the heat and humidity of the Peruvian jungle and the extreme heat of Death Val- ley in America setting course records, World Records and on occasions beating the men!

As well as taking part in races Mimi enjoys organising her own adventures; in 2004 she ran from Paris to London starting with the Paris Marathon and fin- ishing the 300 plus mile run with the London Marathon. In 2014 Mimi, who was co-founder of Freedom Runners, ran 1,223 miles across South Africa to raise awareness and funds to support an initiative that addressed feminine hygiene management and education in that country, providing 400 girls with re-usable feminine hygiene products enabling them to remain in education. She is well known for her “doubles” tak- ing on some of the worlds toughest endurance races and not just doing them once but running back to the start once she has finished.

In September 2017 Mimi took on an epic run to try and break the female world record to run across America a distance of 2,852 miles. The run was brought to an abrupt end due to an injury after running 2, 215.24 miles in 40 days, across the third largest continent in the world and at the time on track to break the record.

After America it took Mimi a long time to come to terms with the fact that she could no longer run the silly distances she so loved but after allowing herself to grieve the loss of her running her resilience and determination allowed her to go on other journeys this time on two wheels rather than two legs and after years finally took up the challenge of overcoming her fear of water by learning how to swim front crawl and take part in her first triathlon. 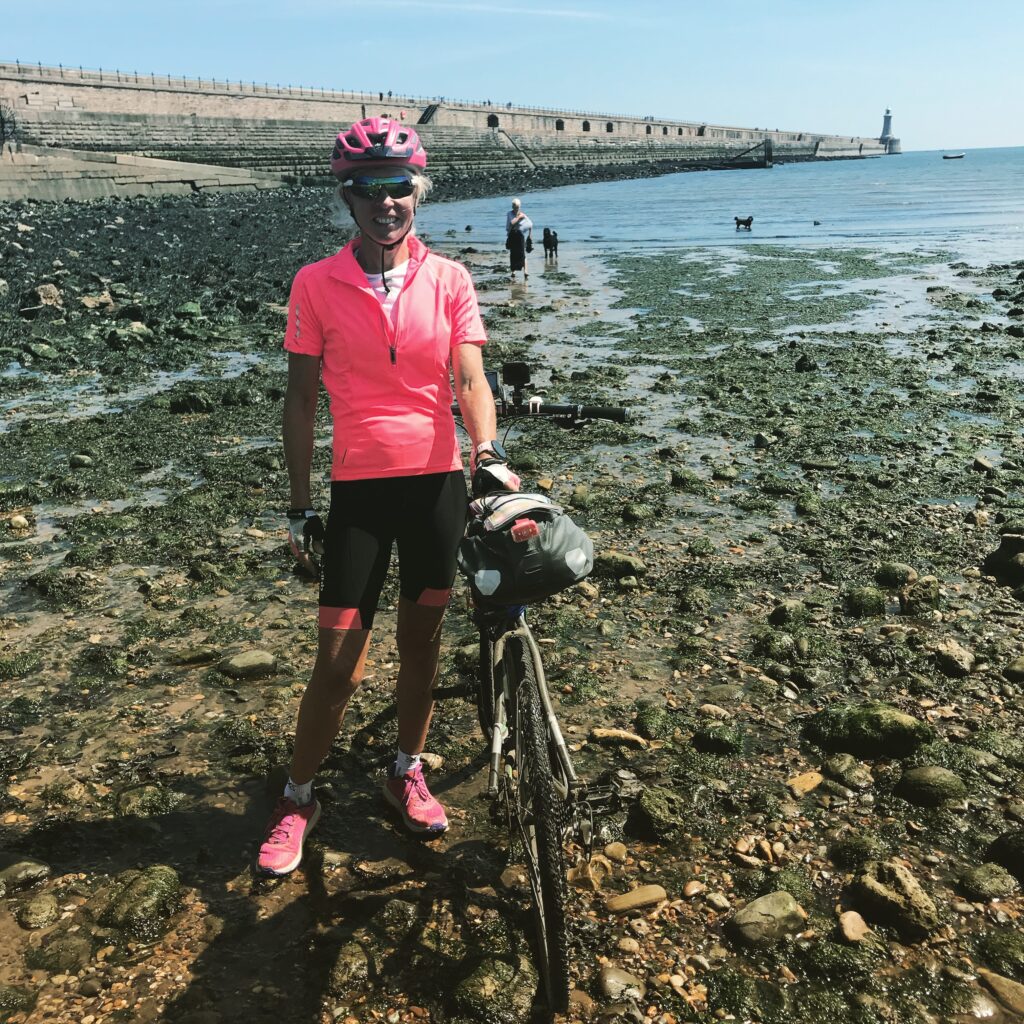 I’m often asked why I run. The answer is simple, because I love it. Running makes me feel happy, gives me space to have my own thoughts, the freedom to explore otherwise forgotten places and remote landscapes – it gives me a reason for adventure. I love the places I have travelled to, the inspirational people I have met along the way. Running gives me more energy to face the day, makes me feel alive and it’s helped me put anorexia firmly in it’s place. Why do I run? I run because I can.

‘Mimi Anderson is considered to be one of the World’s most inspirational female distance runners. Women all over the World can relate to her on every level. She is a mother, a grandmother, a wife and daughter. She is witty, beautiful, smart, kind and very normal. Yet she is one of the toughest competitors you are ever likely to meet. Her determination and grit know no bounds and she will push her body to the limit to achieve her goals and ambitions. Through running, she has proven to herself that she can do so much more than she ever thought possible. The broken anorexic body is long gone. In it’s place now stands a strong, healthy, formidable woman, oozing with happiness, confidence and self belief. And that is the power of running’.

'Mimi continues to be inspirational. For anyone who doesn’t know Mimi let me try to briefly describe this barking mad woman. She is as slight as any person I can imagine, she loves pink, she is absolutely driven and she has been the topic of conversation amongst everyone involved in the race. She is living proof that in extreme ultra distance racing women can be mens’ equal and in this case can quite possibly kick ass too.'

Quote from Race Director of the 6633 Extreme Ultra Marathon